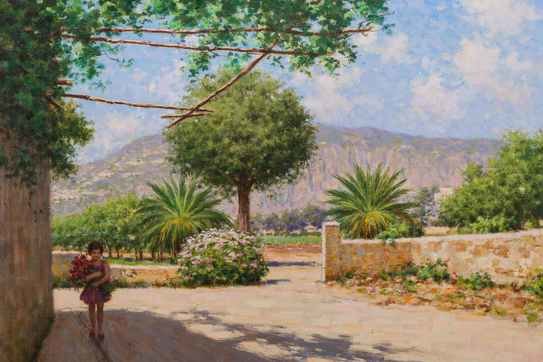 In re-examining the vast oeuvre – paintings, drawings, and commercial graphic art – of Antonio Cutino (New York, 1905 – Palermo, 1984), one is surprised by the absolute consistency of his vision throughout nearly all of the 20th century. Even if he is not considered a major artist, he succeeded, in the name of tradition, in developing a personal, recognisable style, almost ‘timeless’ in many ways. Over the course of decades, he appears to have refined his skills, specialising in portraits, mostly of women; landscapes clearly influenced by 19th-century art; and still lifes.
Beginning in the late 1920s, parallel to his activity as a painter, Cutino created a truly impressive number of graphic works – posters, flyers, labels, signs, and logos, as well as book jackets and illustrations – adapting to the demands of his clientele with results of remarkable quality and an ability to communicate visually with great immediacy.

In the Footsteps of Tradition