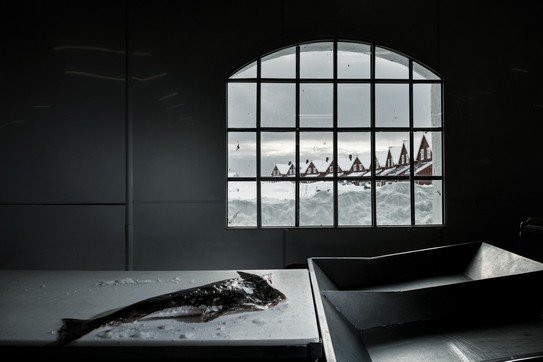 Valentina Tamborra, a Milanese photojournalist gifted with a profound sensibility, constructs a unique bridge between Italy and Norway, with cod fishing as the common denominator.
She retraces the steps of the 15th-century voyage of the Venetian nobleman and merchant Pietro Querini, who after being shipwrecked in the Lofoten Islands, discovered both the hospitality of the local fishermen and the unique qualities of the fish he would eventually export to his native city.
But Tamborra is not a simple observer of life on these islands; she investigates, explores, shares the stories, hard work, and joy, in a visual narration that focuses in on the people and extends out over the extraordinary landscapes, dotted with structures for drying cod that her lens transforms into evocative installations.


Valentina Tamborra was born in 1983 in Milan, where she lives and works. She focuses mainly on photojournalism and portraits, with a penchant for mixing storytelling with images. She has collaborated with some of the principal NGOs and other organizations such as AMREF, Doctors without Borders, Albero Della Vita, Emergenza Sorrisi, and the Italian Red Cross. Her projects have been the subject of exhibitions in Milan, Rome and Naples.
She is an instructor at the Istituto Italiano di Fotografia in Milan and has taught classes and workshops at the IED (Istituto europeo di Design) and NABA (Nuova Accademia di Belle Arti), where Doppia Luce, her first large personal project, was exhibited and later turned into a lecture cycle. In April 2018, she won the Premio AIF Nuova Fotografia at Milan’s Photofestival.

Skrei - The Journey. A Story between Italy and Norway
Valentina Tamborra

In the Lines of the Individual. The Norwegian Photographs of Valentina Tamborra
Nicola Gardini

A Story between Italy and Norway