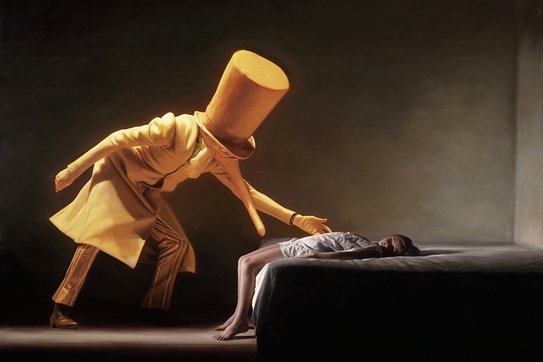 Gottfried Helnwein is known for his hyper-realistic images and his photo portraits of celebrities such as Mick Jagger, Michael Jackson, Andy Warhol, Arnold Schwarzenegger, Marilyn Manson and the band Rammstein. In his provocative images, he articulates themes of violence and abuse in ways that are as compelling as they are shocking. In particular, children, whose innocence, naivety and tenderness he brings into focus, are projection surfaces for him.

Above all, the culture of European Romanticism provides him with iconographic motifs and subjects, especially its black side, with its abysses of the soul lost in nightmares, in the disturbing and in its own dramaturgy of fear and cruelty. There are direct quotations from Caspar David Friederich, Johann Heinrich Füssli, Arnold Böcklin, to the emphatically Christian in early Romanticism and to Richard Wagner’s “Gesamtkunstwerk”. From Wagner and Nietzsche, a stringent arc develops to Hitler’s propaganda machinery, the staged epic mass marches of the SS, and leads in Helnwein’s case not least to his great Carl Barks admiration, whereby he himself fits Mickey Mouse into the context of Nazi rule.

The exhibition is dedicated for the first time to this level of reflection in Helnwein’s work and first summarizes those dark paintings in which the image is developed out of blackness and deep blue (as a romantic keynote) and leads over to the atrocities of the Nazi regime, in that in particular the experiments on imprisoned persons and those segregated into psychiatric wards underpin the racial ideology. The central motif of almost all of Helnwein’s pictures is the innocent child, above all defenselessly at the mercy of adults. The childlike nature, from the innocence of the early years to young girls who themselves take up arms in his more recent works, shows differentiated facets of the soul that are stirring, emotionally gripping, and technically brilliantly realized.