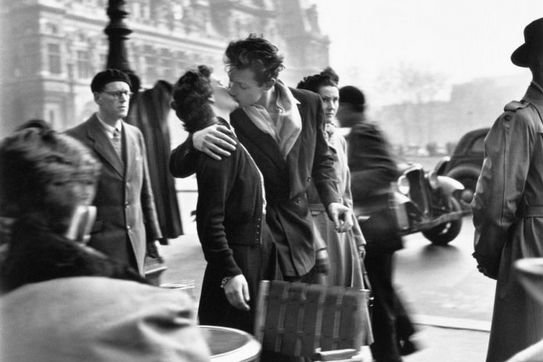 Robert Doisneau (Gentilly, 1912 - Montrouge, 1994) is regarded as one of the founding fathers of French humanist photography and street photojournalism. Through his lens he was able to grasp the daily life of the men and women who populate Paris and its suburbs, telling the city and its inhabitants with an ironic and light touch but also with deep humanity and participation.
The volume collects 130 black and white images from the Atelier Robert Doisneau in Montrouge, which houses the photographic archive.
Whether they are photographs made on commission or the result of his free wandering around Paris, the artist's personal style is outlined through these shots, combining charm and imagination, but also a freedom of expression not far from surrealism. These are images that capture moments of daily happiness among ordinary people - such as the famous Le Baiser de l'Hôtel de Ville, or "The kiss" - and in which are mixed tenderness, sometimes veiled by melancholy, but also notes of humor, always present in his work.