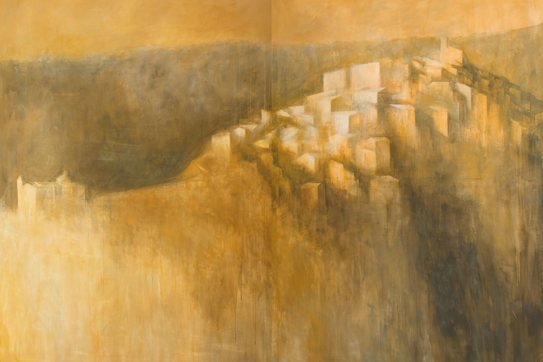 Roberto Giglio showcases, on large canvases, postcards of these lifeless landscapes that repeat themselves, illustrated to visitors as a set of viewpoints, traps from which to contemplate the abyss, which is not only the painful observation of the loss of cultural and historical-artistic heritage of a territory, but also as the by-product of violent cancellation, an outright rift inflicted upon the collective memory, which then morphs into an inner sense of psychic unease. It is here that Giglio’s work, in my opinion, breaks away from the documentary genre advocated by whistle-blowers, typical of the connoisseur of demo-ethno-anthropological assets, as well as from the militant approach of those who have worked and continue to strive towards reviving their native villages, thereby achieving a universal dimension. The images we are confronted with, and which do not seem to offer us a way out, chronicle the disappearance of communities, while evoking health apocalypses, wars, environmental disasters, and mass extinctions; they remind us of the images that two years ago went viral, announcing the end of the world to human beings locked in their houses, that mistook the solitude of a self-imposed seclusion for the disappearance of all others.

Contents
Views on the end of the world Giorgio de Finis