Italian Drawing of the 20th Century

This volume aims to emphasize the importance of drawing in the history of twentieth-century Italian art.
Drawing has constituted the underlying structure of every form of artistic experimentation, being the expressive vehicle of choice for painters and sculptors alike. If we consider the term in its broadest sense (that is, as an artwork on paper in any medium, including watercolour, collage, pastel or ink) drawing represents the first visualization of an idea, the foundation on which all artists have built. Drawing captures creativity in its most immediate state and in the most authentic manner possible, providing an insight into the genesis of a style. It is born of daily artistic practice and, given its private character, is never ‘censored’ or corrected.
This book attempts to overturn the traditional way of looking at drawing. It does not take the history of artistic movements or finished works as its starting point, only then going on to relate these to works on paper, but rather identifies genres, themes and styles in the drawings themselves, which span the whole of the twentieth century. The drawings are given a voice of their own.
Knowing how to read a drawing in terms of its details, visual associations and references to everyday life enables one to uncover the secret world of an artist, and enter into his or her thought process.

Medardo Rosso, Conceptual Revolutionary
Equivocal Interpretations
Effects on Paper
On Wildt’s Drawings
The Futurists
For a Futurist Reconstruction of the Universe
The Interpenetration of Bodies and Simultaneity
Speed and Machines

Landscapes
The New Milan of Boccioni
Visions of Modernity
Metaphysical Peripheries
Between Myth and Nightmare
Portraits
Divisionism, Futurism and Metaphysical Art
Calls to Order
The Dominance and the End of Style

Figurations
The Beauty of the Rule
The Lure of the Ancient
Small and Large Histories
Cagnaccio di San Pietro
Anti-Classical Altarpieces and Anti-Fascist Realism
Non-objective Tendencies
A Forerunner
The Como Group
Milan, the Centre of Abstract Art
Another Road

DRAWINGS BY THE GREAT SCULPTORS

A Weightless Time
Marini: The Miracle of the Line
Manzù: Drawing is Life
Consagra: Drawings that Open up Possibilities
The Sign of Fontana
Melotti: The Space and Time of a Note

The Forties
Dreams
Purities and Impurities

Forms of Realism and Abstraction
From Neo-Cubism to Realism
Continuities between Futurism and Abstract Art
Milan: Spatialism, Nuclear Art, Azimuth
Rome: Artists of Sign and Gesture
The Material Dimension of Art Informel
Tancredi: Drawing is Freedom
A Rapid Ascent between Italy and American Museums
Tancredi’s Artistic Legacy on Paper. The Last Four Years of His Life

Domenico Gnoli: Renaissance Know-how
Enrico Castellani. Paper Reliefs
Preamble
Thinking on Paper
High and Low between Neo-Dada and Piazza del Popolo
Inside Fabio Mauri’s Works on Paper
A Mistaken Definition of Roman Pop Art
Turin as Stage
In the Spotlight between the Late Sixties and the Early Seventies
Some ‘Poor’ Works on Paper
A Reluctant Torinese: Carol Rama
Revisiting the History of Art: Mondino and Salvo
Two Milanese Case Studies
An Artistic Crossroads: From the Cenobio Gallery to the Seventies
Transversal. Studio Marconi
Words and Images
Between Visual and Conceptual Poetry
Alphabets and Enigmatic Signs
Narratives 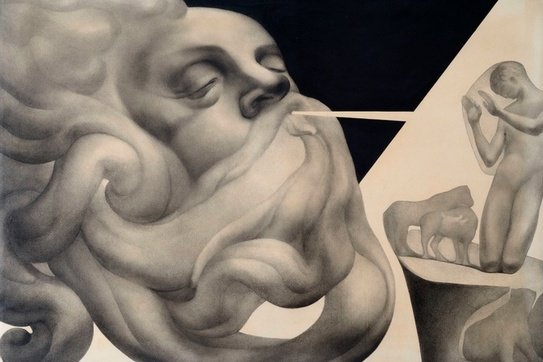 Who's Afraid of Drawing?