This publication, edited by Germano Celant, presents the artistic career of Richard Artschwager (Washington, D.C., 1923 – Albany, New York, 2013) in a rich and detailed account that interweaves the events of his personal life with developments in history and on the international artistic scene.
From his youth and then the beginning of his career in the late 1950s — when he gave up his job as a cabinetmaker in New York to devote himself to working fulltime as a painter and sculptor — the chronology, divided up into sections, retraces the whole of the artist’s life. Interested since his youth in photography and painting, he embarked on a line of research that reflected the idea that he “wanted to make sculpture for the eye and painting for the touch.” The very large body of work created by Artschwager over the course of his life includes hitherto unpublished photographs dating from the years 1944–46 and documenting the period he spent in Europe during the war, oil paintings on canvas from the early 1950s, the acrylics on Celotex that established his reputation in the 1960s along with the sculptures in wood and Formica, followed by the ones in horsehair and plastic bristles of the 1990s and the first decade of the new century.
As Celant writes, “the attention Artschwager paid to the setting, in both painting and sculpture, turned the object into a movable body, able to fit into, to ‘inhabit’ the space.
Its being grew dynamic and its components were scattered over the walls, demonstrating its environmental relativity. Through this transformation the artist not only incorporated the territory that enveloped art — house, gallery and museum, i.e. the circumstances provided for its display — but tended to assert that in his work there were no definitions of locations and forms. Its dispersion could become total, just as it could exist in any urban space, private or public, without a particular point of support and open to variations not only in location but also in size and volume. Artschwager’s object was no longer obliged to be seen in proportion to an existing object or to a familiar denominator, such as the table or chair, but could vary its distribution and its scale, deforming and altering itself, breaking up and dispersing. In conjunction with the establishment of relations with the whole, the artist adopted an emphatic approach that defined an abandonment of control in order to achieve a greater expressivity of the object.” 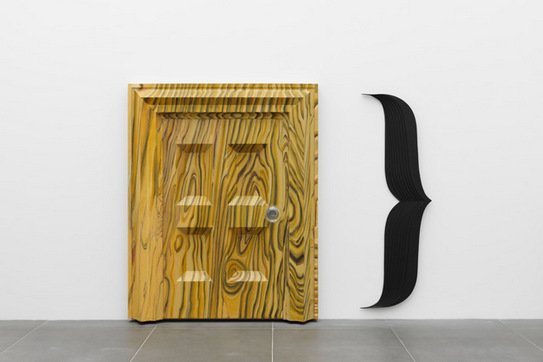