Mario Giacomelli and his time

On the occasion of the twentieth anniversary of the death of Mario Giacomelli (Senigallia, 1925-2000), the volume pays tribute to the great photographer of the twentieth century by proposing a selection of works which, in highlighting the originality of his research, at the same time offers an overview of the world of photography in which he worked.
All this, thanks to the comparison with a series of shots by great authors who can be put in dialogue, be it ideal or real, with his work: Nino Migliori, Paolo Monti, Gianni Berengo Gardin, Robert Doisneau, Brassaï, Henri Cartier- Bresson, Kikuji Kawada, Jacques Henri Lartigue, Herbert List, Leo Matiz, Ara Güler.
Although strongly rooted in his territory, Giacomelli immediately managed to overcome geographic boundaries thanks to his experimental art, conquering great international critics such as John Szarkowski, who in '64 included him in the MoMA collection. A curious young man as he was, animated by a strong spirit of research, Giacomelli joined the creation of the photographic circle Misa, born in Senigallia in 1954, which made an important contribution to the theoretical debate held in Italy around the functions and aesthetics of photography, of which documentation is offered in these pages. 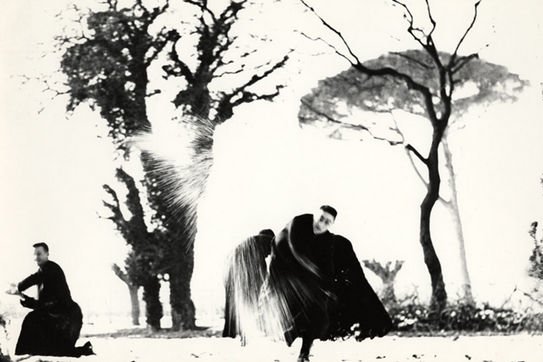