Memory of a Garden

The apocalypse image is vivid, evoked not in a Biblical key but rather as a possible state of destruction/zeroing, manifested through the presence of soil: abused, abandoned, but stratified with meaning. Hence the choice of an infertile ploughed field, a waste land on which dry branches and empty flowerpots are placed. It is the setting for humanity’s quest, for a primordial search expressed through the rituality of simple gestures—those of the artist’s performances—like washing an atlas or ploughing the soil—and is revealed through the memory of a garden—that is, in the experience of the body and in the memory of child sounds, almost at the origins of everyone’s existence, like the cry of a newborn and the music of a carillon. (Simona Caramia)

Maria Luigia Gioffrè belongs to the group of artists-thinkers who question themselves continually about the meaning and directions of the things in the world, but who do not advocate any ideology. Instead, she lives her actions as poetic opposition to the present. She began her artistic career with photography and turned inevitably to performance art, to give wholeness to her own need to create theatrical representation in its fullest sense. She blends the body into performance practises, concentrating on the action itself, which she feels as an installation that breathes, as a painting that comes to life, as a fragment of theatre art. (Gaetano Centrone) 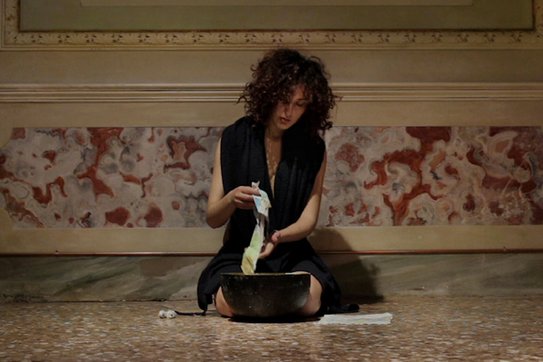