The volume presents Bellum, the new artistic project by Carlo Valsecchi (Brescia, 1965). Forty-four large-format photographs tell the ancestral conflict between man and nature and between man and man; the use of nature as a defense from the other man and likewise the defense of man from nature. With the mountain as its symbolic representation, the project originates from an exploration of the territories and fortified buildings of the Italian north-east linked to the First World War, one of the last moments in the history of Western humanity in which men's destiny and experience were closely connected to the natural environment, its conformation, its laws and its control. Valsecchi traveled those mountains with his optical bench for three years, sublimating in his shots a raw reality which often took an abstract form, intimately aesthetic and absolute in its essence. The images of Bellum become gashes, portals made of light and composition, suspended in an endless time between silence, isolation and wait.
The volume includes texts by Florian Ebner, chief curator of the Cabinet de la Photographie of the Center Pompidou in Paris, and Yehuda E. Safran, art and architecture critic and professor at the Pratt Institute in New York.

It is far from obvious or easy to determine or even describe the qualities of which these photographs are made. They are as rare as they are difficult to obtain, these qualities are the qualities which hold our attention, direct our eyesight on to an incomparable reality, a reality which exists only in our mind and nowhere else. But it is this reality to which all else, all other “realities” are subordinated.
Yehuda Emmanuel Safran

Valsecchi’s photographic balancing act, his “process of negotiation,” is a constant counterweighting of the blankness of the images and the reality contained in the play of signifying elements staged on his photos’ expansive tableaux. At one moment he is an archaeologist, interpreting and visualizing extant buildings and fault lines in the earth, at another he is a metteur en scène or compositeur, finding visual metaphors for war.
Florian Ebner 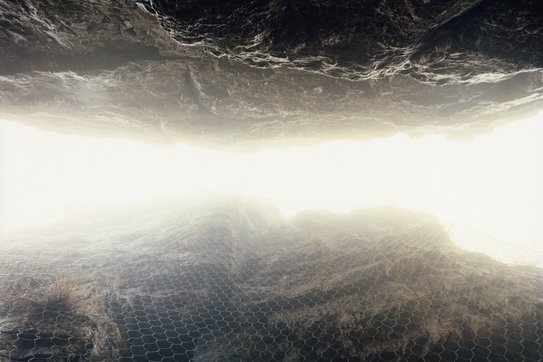