The volume, promoted by the Scanavino Archive, is dedicated to the ceramic production of Emilio Scanavino, one hundred years after the artist's birth.
Scanavino - among the protagonists of the so-called informal generation and of the movement established himself as a spatialist in the aftermath of the Second World War - he dedicated himself to over thirty years of defining, through a reflection on the sign, of another alphabet and another language, not to be read but to be deciphered.
Even the ceramic works - often neglected because they are absorbed within its largest sculptural production - they fit fully into this research.
The volume, which presents sixty works including glazed and engobed terracotta, majolica and metal objects produced between the beginning of the fifties and the end of the sixties, therefore allowing to reflect on the artist's relationship with polychrome ceramics to deepen the investigation of the related formal problems.

Accompanied by a critical text by the editor, the volume is completed by a biographical appendix.

Scanavino’s is the handprint of someone who binds, who unties, who weaves. Not a figuration, but the image of a doing. Or rather, “the image of some doing,” given that the human animal does not know, in principle, what to do.

Contents
Emilio Scanavino and the Secret of Signs
Marco Scotini 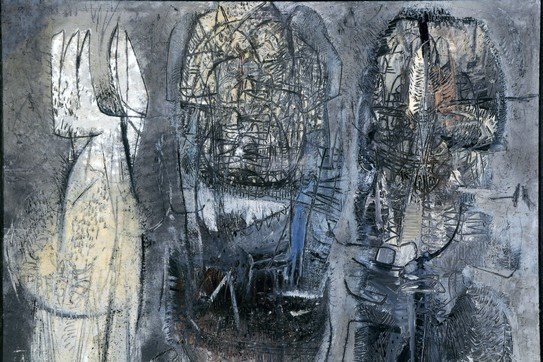